Please help SMRF spread the word that the Council’s original decision to remove Cape’s Dam is a good decision, and will NOT drain the river. The full flow of the river will be in the natural riverbed, which is best for recreation and the ecosystem. SMRF supports the dam removal, knowing this is best for the river and for recreation too. The dangerous, damaged dam will be removed with funds from U. S. Fish and Wildlife Service, and then there will no longer be a ditch or mill race diverting water away from the river. This will be good for the endangered species and all the other species in the river, especially during drought. A free flowing river with adequate flow in it, even during hot, dry summers, will be good for recreation as well.

Removing Cape’s Dam has been studied and discussed for many years in City Parks Board and Council meetings and public hearings.  There were even earlier US Fish & Wildlife Service studies of the shape of the river, done years ago so that they would be ready to propose removal when floods damaged the dam.  The dam is quite damaged now, and since it is built of cedar posts, some iron posts and piled rocks, it cannot be easily fixed by piling more rocks on it.  US Fish and Wildlife Service originally offered to work on the permitting needed to remove the dam, would have given the City the funds to do the actual removal.

The San Marcos River Foundation lists answers below to incorrect statements written by dam advocates hoping to rebuild Cape dam.  Our answers are offered in an effort to correct the incorrect information being circulated. We believe that it is time for all to unite in doing what is best for the river.  We would hope the community could now focus on removing the dam and opening the park again as soon as possible.

How Cape’s Dams Affects the River

Understanding how a dam is measured, is essential to understand how dams affect rivers, causing the riverbed to be variable in depth downstream of them.

We realize this more natural river flow, once the dam is removed, will be good for recreation and better for endangered species and other inhabitants of the river, like fish, as well.  USFWS is planning some boater and swimmer access points that will be built during the dam removal project, as part of the project. This will save time so the park can be opened as soon as possible, without the city having to go through another permitting process to build these access points.

Lives of a River- Dams on Texas Rivers 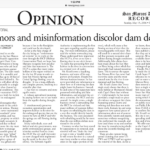 Map of the Mill Race Area 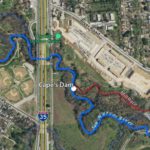 US Department of the Interior- Fish and Wildlife 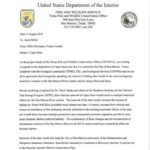 Letter from Texas Parks and Wildlife 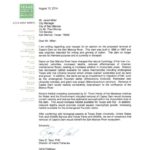